President Trump tweeted on Monday that he would announce his decision on whether to waive sanctions on Iran at 2:00 p.m. 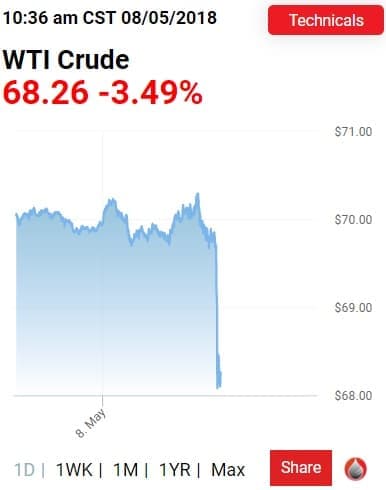 Early on Monday, WTI Crude breached past $70 a barrel for the first time in years, as the market was concerned about the Iran decision whose deadline was May 12, and about Venezuela’s plunging production.

The oil market won’t have to wait until May 12 to learn whether the U.S. will be walking out of the deal, as President Trump will be announcing his decision later today.

Many analysts believe that this time around, President Trump won’t waive the sanctions on Iran, and such decision could reduce Iranian crude oil exports in an increasingly tighter global oil market.

Sanctions on Iran could further raise the price of oil, analysts say, but Iran itself is not a fan of too high oil prices. Iran’s Oil Minister Bijan Zanganeh said over the weekend that Iran was all for a “reasonable” oil price, suggesting that the current price level is unreasonable and the result of “manufactured tensions.”Related: Is This The End Of Diesel Trucks?

While Iran and its archrival and fellow OPEC member Saudi Arabia are reportedly at odds over what a ‘reasonable’ price of oil should be, the market awaits the Iran decision. Yet, not all analysts believe that if the U.S. walked away from the deal, oil prices would jump higher.

Alejandro Barbajosa, vice president at Argus Media, is one of them, telling CNBC that the possible reduction of Iranian oil supply is already fully priced in, and that a possible actual supply drop would be ‘paced’ and take place in the second half of this year, or even early next year.

“We’ve already seen that bullishness factored in over the past few weeks … The markets have already reacted to the expectation of less supplies going forward,” Barbajosa said.

By Tsvetana Paraskova for Oilprice.com