● Oxide and transitional material make up +90% of the Exploration Target

“Cora remains fully focussed on the DFS and looks forward to updating shareholders on its progress during the quarter.” 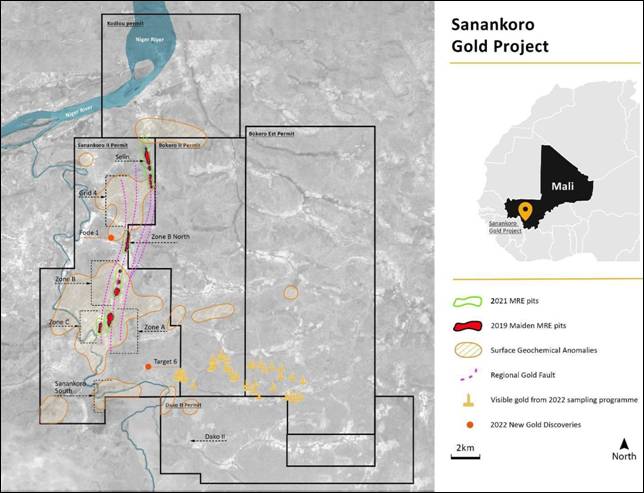 Figure 1:  Map showing the locations of the deposits and discoveries at the Sanankoro Gold Project

The Sanankoro property is underlain by a Paleoproterozoic Birimian volcano-sedimentary formation that trends north-northeast to south-southwest, controlled by regional-scale shear zones. The formations comprise intercalated units of weakly metamorphosed feldspathic sandstones, siltstones and phyllites, often with a carbonaceous component. Volcanoclastic sediments/tuffs of acidic to intermediate composition occur within the sedimentary package in conjunction with both mafic (dioritic-gabbroic composition) and felsic igneous intrusive units locally incorporated (Figure 2). 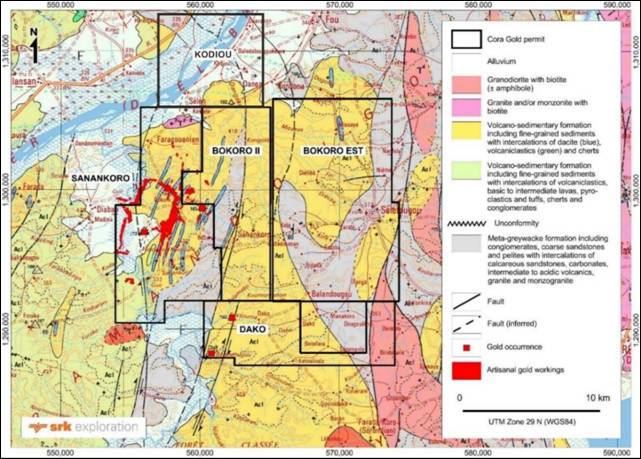 On a project scale, Sanankoro is characterised by the 2km wide Sanankoro Shear Zone, which can be traced over 30km from Kabaya South in the western Yanfolila mine area to north of the Niger River beyond Selin and onto Karan. Within the Project area, each of the prospects are underpinned by a strong linear parallel, and where strong mineralisation is developed, a pronounced localised northeast-southwest focused zone of en-echelon veining and associated sulphide development.

Given the approximate extents of the artisanal gold workings, two well defined trends are evident. Most of the larger workings are elongated in a north-northeast to south-southwest orientation (approximately 010°), a trend that is consistent with regional structures and gold mineralised zones in Mali. Oblique to this is a southeast-northwest trend (approximately 120°), along which artisanal workings are preferentially elongated. Structurally, the property includes mapped and inferred linear and curvilinear north-south and northeast-southwest orientated faults, with most annotated as being associated with dextral movement.

The dominant form of structural development is shear/thrust fronts with secondary internal shear zones and local folding, most of which are now steeply dipping. Gold mineralisation broadly occurs within planar zones that dip steeply to the east at approximately 70°. However, given the apparent structural control on mineralisation, this represents a generalisation and localised variation, and complexities will inevitably occur.

Cora commenced exploration in 2017 and has subsequently completed detailed geological and regolith mapping across an area of some 120km2 at a scale of mainly 1:2,000 over both the Sanankoro and Bokoro II permits, although local areas more distant from the primary structural corridor were covered at a scale of 1:5,000. This work was supported by termite mound sampling and mapping of artisanal workings

Between December 2017 and April 2022, Cora completed 1,321 drill holes across the Sanankoro Project area for a total of 99,834 m. This drilling was a combination of reverse circulation (‘RC’), air core (‘AC’), RAB and diamond drill (‘DD’) holes, with diamond core tails on a small number of RC and AC holes (Table 1).

12 areas were identified (Figure 3) based on:

● the extrapolation of the current Mineral Resource estimate ( ‘MRE‘) i.e., mineralisation outside the reasonable prospects for eventual economic extraction (‘RPEEE‘) pit shells at Selin, Zone A, Zone B North, Zone B, and Zone C

● targeted drilling that intersected mineralisation beyond the MRE areas

The model informing the July 2022 MRE was used for the areas below the RPEEE pit shells. Other areas were modelled at a 0.1 g/t Au threshold value and to a depth between 120 m and 170 m below surface, depending on the depth of the drill holes in each area. The 0.1 g/t Au threshold was used to ensure continuity between drill holes. The number and type of drill holes informing the different areas are summarised in Table 2. The mineralisation is generally consistent along strike and down dip, with volumes similar in shape to the modelled areas of the 2022 MRE. The most significant geological risk identified is the uncertainty in the depth extent and grade continuity of the gold mineralisation outside of the Mineral Resource.

The grade range was determined using a cut-off of 0.4 g/t Au (equivalent to the 2022 MRE cut-off). The 30th and 70th percentiles were used to determine the grade range within each volume. The modelled volumes were split by weathering/oxidation surfaces into oxide, transitional and fresh. Representative volumes for the 0.4 g/t Au cut-off were determined using the ratio between the total sample length informing the modelled volume against the total sample length informing the cut-off. The volume range was determined using ±15% of the modelled volume.  Density values were applied to the weathering/oxidation domains, such that oxide material has a density of 1.86 t/m3, transitional 2.58 t/m3 and fresh a density of 2.74 t/m3. The densities applied were the same as applied for the July 2022 MRE. The tonnage range was determined using the modelled volume range multiplied by density. Approximately 50% of the Exploration Target is in oxide, 40% in transitional and 10% fresh material. The minimum gold content is estimated from the minimum tonnage and grade and maximum content from the maximum tonnage and grade.

The Exploration Target for Sanankoro is estimated to contain between 26.0 Mt and 35.2 Mt with a grade range of 0.58 g/t Au to 1.21 g/t Au (490koz to 1,370 koz) (Table 3). The potential quantity and grade of the Exploration Target is conceptual in nature and is therefore an approximation. There has been insufficient exploration drilling to estimate a Mineral Resource and it is uncertain if further exploration will result in the estimation of a Mineral Resource.

Additional drilling is under consideration to validate the size of the Exploration Target and identify further areas of interest.

Over the coming months, future exploration budgets and drill plans will be considered with the aim of upgrading the Exploration Target areas in the Table 3 to further increase the mine life and Mineral Resource growth at Sanankoro before gold production commences.

Cora has implemented an extensive QAQC programme which includes the analyses of blanks, certified reference materials (‘CRMs’), duplicates and screen test work for all laboratories. One blank and one CRM is inserted into sample batches at a rate of 1:20. Cora has both oxide and sulphide CRMs, and these are inserted depending on the material of the sample batches, such that the CRM matches the sample material type.

The information in this release that relates to the Exploration Target was reviewed by Mr Anton Geldenhuys, a Competent Person who is a Member of the South African Council for National Scientific Professions (SACNASP). Mr Geldenhuys (Principal Resource Consultant) is an independent consultant with CSA Global and has sufficient experience that is relevant to the style of mineralisation and type of deposit under consideration, and to the activity which he is undertaking, to qualify as a Competent Person as defined in the 2012 Edition of the ‘Australasian Code for Reporting of Exploration Results, Mineral Resources and Ore Reserves’. Mr Geldenhuys consents to the inclusion in this release of the Exploration Target in the form and context in which it appears. Mr Geldenhuys confirms that the information contained in the Appendix of this release that relates to the reporting of the Exploration Target at Sanankoro is an accurate representation of the available data. In addition, Mr Anton Geldenhuys qualifies as a Competent Person in accordance with the guidance note for Mining, Oil & Gas Companies issued by the London Stock Exchange in respect of AIM Companies, which outlines standards of disclosure for mineral projects.