When we think of wealth today, we often think of the massive personal fortunes of business magnates like Bill Gates, Jeff Bezos, or Warren Buffett. However, it is only since the Industrial Revolution that measuring wealth by one’s bank account has been a norm for the world’s richest.

For most of recorded human history, in fact, the lines around wealth were quite blurred. Leaders like Augustus Caesar or Emperor Shenzong had absolute control of their empires – while bankers like Jakob Fogger and Cosimo de Medici were often found pulling the strings from behind.

This infographic focuses on the richest people in history up until the Industrial Revolution – and in the coming weeks, we will release a second version that covers wealth from then onwards (including figures like Andrew Carnegie, John D. Rockefeller, Jeff Bezos, etc.).

Click here or on the graphic to view the full-screen version. 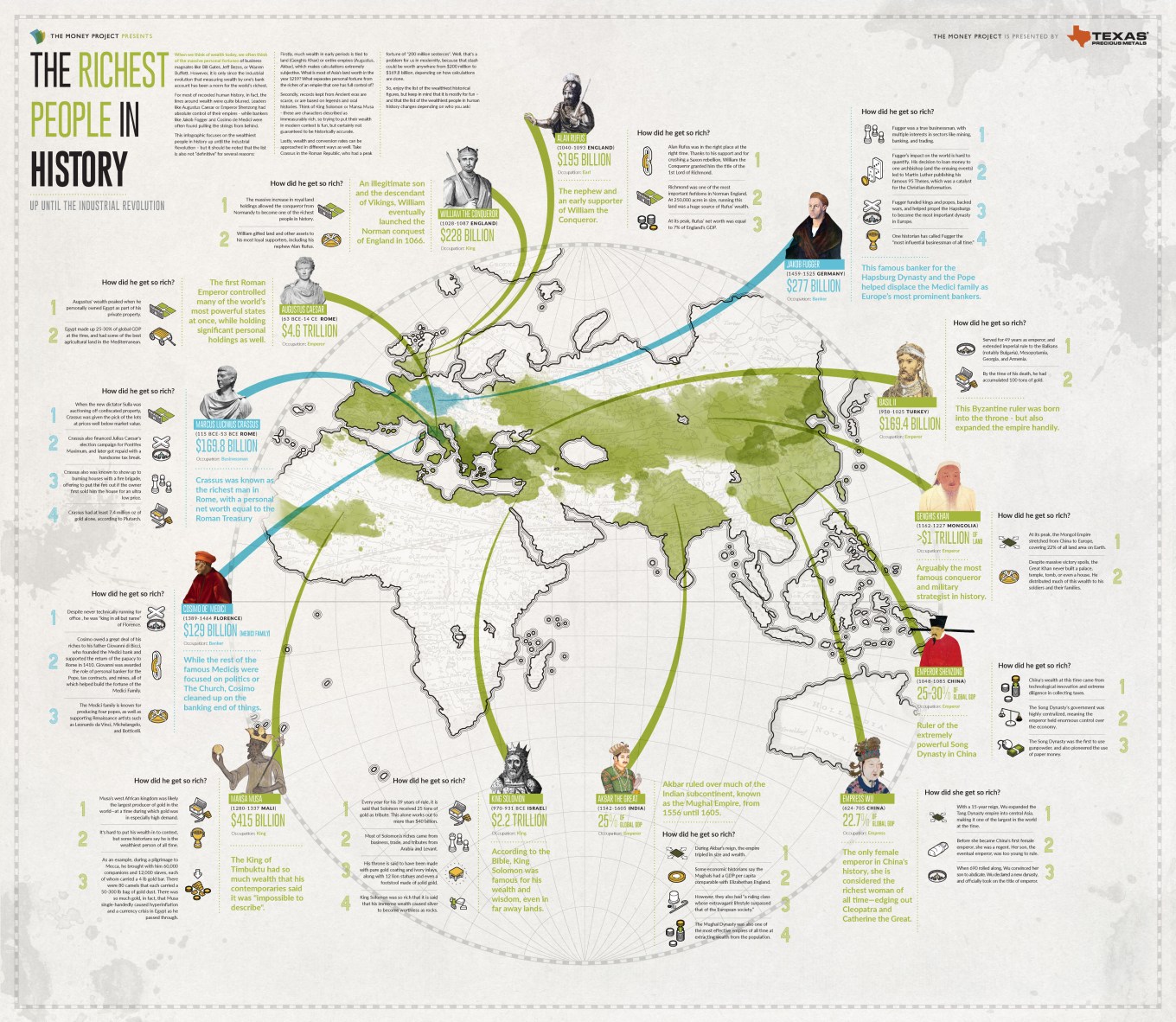 Courtesy of: The Money Project
Click here for a larger, more legible version of the infographic that you can explore in-depth.

While it is certainly fun to speculate on the wealth of people from centuries past, putting together this list is exceptionally difficult and certainly not definitive.

Firstly, much wealth in early periods is tied to land (Genghis Khan) or entire empires (Augustus, Akbar), which makes calculations extremely subjective. What is most of Asia’s land worth in the year 1219? What separates personal fortune from the riches of an empire that one has full control of? There are a wide variety of answers to these questions, and they all influence the figures chosen to be represented.

Secondly, records kept from Ancient eras are scarce, exaggerated, or based on legends and oral histories. Think of King Solomon or Mansa Musa – these are characters described as immeasurably rich, so trying to put their wealth in modern context is fun, but certainly not guaranteed to be historically accurate.

Lastly, wealth and conversion rates can be approached in different ways as well. Take Crassus in the Roman Republic, who had a peak fortune of “200 million sesterces”. Well, that’s a problem for us in modernity, because that stash could be worth anywhere from $200 million to $169.8 billion, depending on how calculations are done.

About the Money Project

The Money Project aims to use intuitive visualizations to explore ideas around the very concept of money itself. Founded in 2015 by Visual Capitalist and Texas Precious Metals, the Money Project will look at the evolving nature of money, and will try to answer the difficult questions that prevent us from truly understanding the role that money plays in finance, investments, and accumulating wealth.