Power Metal Resources PLC (LON:POW),  the London listed exploration company seeking large-scale metal discoveries across its global project portfolio  provides an update to shareholders in respect of lithium focussed fieldwork at the Selta Project (“Selta” or the “Project”), located in Australia’s Northern Territory. Selta is held through its subsidiary  First Development Resources PLC  (“First Development Resources” or “FDR”) which is seeking a planned listing in the  London  capital markets (Power Metal holds 62.12% of FDR and 58.59% after transaction outlined below).

· Approximately 700 potential outcropping pegmatites have been identified by desktop analysis, within a target area of circa 180km2 (see Fig.1 below). Given the size of the prospective area and the number of targets generated, the planned fieldwork will initially focus on a 30km2 area in the southeast of the Project (see Figure 1).

· The Phase II fieldwork follows on from the successful findings of the Phase I field reconnaissance programme in June 2022, which confirmed the presence of pegmatite geology over a small area within the south of the Project, with lithogeochemical analysis of 17 samples suggesting potential for a zoned pegmatite system originating from the nearby granites 1.

· Further information in respect of the lithium work programme is provided below.

· FDR continues to advance preparations for its planned listing and is very close to completion of all material work streams.

· To further enhance FDR’s position in advance of the planned listing and in light of the positive progress across the exploration programmes at all projects, the net smelter return (“NSR”) royalties retained by the original vendors of FDR’s projects have been purchased by FDR.

· The two NSRs were originally announced on the acquisition of First Development Resources Pty Limited (“FDR Australia”)(RNS: 29.10.2021 4) and URE Metals Pty Ltd (“URE Metals”)(RNS: 19.11.2021 5) and were each a 2% NSR, with a 1% buyout right for A$1,000,000. The NSRs were held by the original shareholders of FDR Australia and URE Metals whose shareholdings were previously acquired, as outlined in the above dated announcements.

· Each NSR has been purchased for £150,000, payable through the issue of 1,875,000 new FDR ordinary shares of 1.0p (“New FDR Shares”) at an issue price of 8p per share, for a total consideration of £300,000 through the issue of 3,750,000 New FDR Shares. The price of 8p per New FDR Share  is specific to this NSR purchase transaction only and should not be taken as established pricing in relation to an IPO financing for the planned listing of FDR in the London capital markets.

· As a result, FDR holds a 100% interest in all projects and there are now no NSRs over any of its properties.

“Much of the recent focus has been on preparing for FDR’s planned UK listing, however, the team has also remained committed to advancing the project portfolio for the ongoing benefit of FDR shareholders.

Over the past several months the FDR team has worked hard to develop strong relationships with the key stakeholders at Selta to facilitate the efficient deployment of field teams to site to complete value enhancing work.

The technical analysis of the outcropping pegmatites will significantly improve our understanding of the system present at Selta and will help inform future work programmes with the intention of identifying zones within the Project with the potential to host lithium mineralisation.”

“The search for economic deposits of lithium continues to be the focus of many exploration companies globally as they look to capitalise on the strong market conditions which continue to reflect the lack of supply for the ever-growing demand for battery metals including lithium.

Importantly, with our readiness for diamond drilling at Wallal and the ongoing work programme at Selta, we are seeking to ensure FDR is a vibrant exploration business when listed.

The buyout of all project royalties by FDR was an important step, simplifying the structure of the planned listing interests and reflecting the value of FDR’s project portfolio which has been significantly enhanced since their original acquisition.” 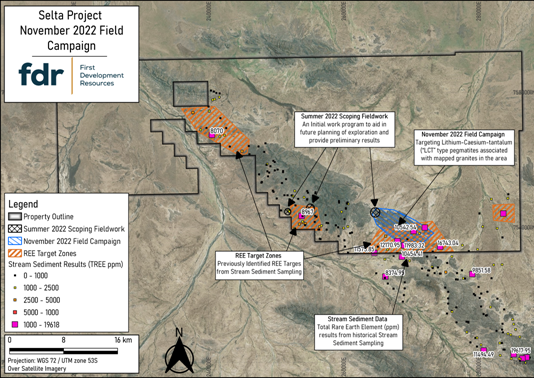 The in-depth review of all publicly available geological, geophysical and geochemical data for the Selta Project identified multiple uranium and rare-earth element (“REE”) targets within the Selta Project area and highlighted the potential for lithium, gold and base-metal mineralisation. The potential for lithium presented an additional opportunity for a mineral discovery within the Selta Project area, an opportunity which had previously been unknown. To gain a better understanding of the potential for lithium-caesium-tantalum (“LCT”) type pegmatites, the Company immediately commenced a lithium review of all publicly available data to help refine target areas for further investigation and deployed a team to Selta to confirm the presence of pegmatite geology.

The announcement in respect of this lithium review and subsequent reconnaissance may be viewed through the following link:

During the reconnaissance the site team was able to confirm the presence of pegmatite geology and collect samples to determine mineralogy.

The results of the sampling and subsequent geochemical testing of pegmatites on the property indicated that the pegmatites analysed on the southwest of the property are part of zoned pegmatite system, most likely originating from the nearby granite. The initial sampling campaign programme covered only a very small portion of the property but provided valuable information for future exploration programmes.

The mineral deposit model for LCT pegmatites is well defined by the United States Geological Survey and suggests LCT pegmatites tend to show a regional mineralogical and geochemical zoning pattern with respect to the inferred parental granite, with the greatest enrichment in the more distal pegmatites. FDR’s initial analysis of data acquired during the Selta lithium review supports this model.

FDR now plans to expand on this initial interpretation and conduct further exploration over a broader area.  Using the data acquired from previous desktop analysis and reconnaissance, a field team led by FDR’s exploration manager will conduct a targeted pegmatite mapping and sampling programme to acquire representative geochemical and geological data in the south of the Selta Project, where previous work has proven the presence of a pegmatite system.

This work aims to constrain the zonation believed to be present in the pegmatite system. The field work will include the systematic mapping of the surface expression of pegmatites along with the collection of representative rock chip samples, which will then be sent for geochemical analysis. This field work will feed into FDR’s technical understanding of pegmatites at Selta, to provide targets and inform future work programmes.

The technical information contained in this disclosure has been read and approved by Mr Nick O’Reilly (MSc, DIC, MIMMM, MAusIMM, FGS), who is a qualified geologist and acts as the Qualified Person under the AIM Rules – Note for Mining and Oil & Gas Companies. Mr O’Reilly is a Principal consultant working for Mining Analyst Consulting Ltd which has been retained by Power Metal Resources PLC to provide technical support.

AA suggests that electric car drivers who don't have off-street parking might find it cheaper to run diesel.