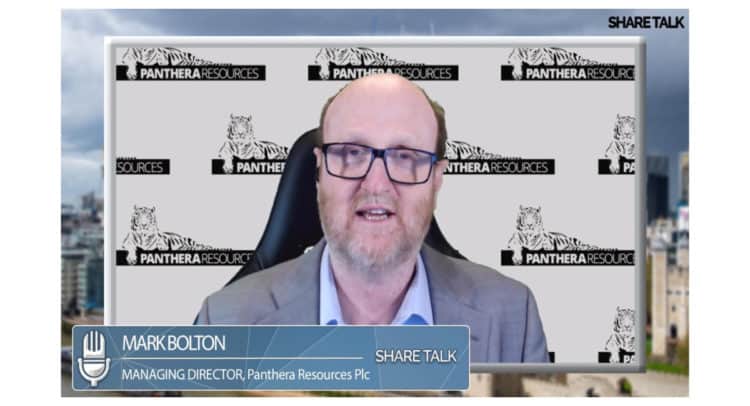 Panthera Resources Plc (AIM: PAT), the diversified gold exploration and development company with assets in West Africa and India, is pleased to announce that the Reverse Circulation (RC) drill rig has arrived on-site at the Labola Project in Burkina Faso.

· 5000 metre RC drill programme has commenced at the Labola Project

· Assay results are expected during quarter three of 2022

Panthera’s associated company, Moydow Holdings Limited (“Moydow”) has designed the drill programme to support an expansion of the National Instrument 43-101 (“NI 43-101”) resource estimate announced on 25 October 2021 and 6 December 2021. The drilling will also test several peripheral targets which could demonstrate the larger-scale potential of the Labola Project.

The Labola project comprises the two exploration licence areas, Wuo Land and Wuo Land 2. The 2021 drilling programme of 4739 metres was completed between May and August on the Wuo Land licence. The primary objective of the 2021 programme was to validate the historical High River Gold and Taurus drilling databases to estimate a maiden mineral resource estimate under NI 43-101 of:

The 2021 programme focused on the main area of historical drilling and in particular the Daramandougou and Wuo Ne target areas. Furthermore, the interest in Wuo Land 2 licence was secured in March 2022, following completion of the 2021 drilling programme.

The proposed resource estimate expansion drilling programme comprises 2000m of infill and step-out holes targeting the Daramandougou area and is included in Area 1.

The modelling of the orebody in 2021 highlighted several mineralised zones where insufficient drill density may have resulted in breaks in continuity of the resulting block model and ultimately gaps in the pit shells generated. It also showed up several of zones that might have been truncated by the model because of a lack of drilling along mineralised trends.

The drilling in Area 1 is designed to provide clarity in the areas of the resource where gaps in the drilling density occur.

The 3,200 metre exploration drilling proposal will test additional pit expansion targets in Area 1 and a number of new targets within the Wuo Land 1 and Wuo Land 2 licences in Areas 1 to 5.

The drilling in Area 1 is targeted at extending areas of known gold mineralisation on the strike extensions of the known Labola mineral resource estimate. In each targeted area recent artisanal activity points to significant mineralisation potential.

In Area 4 the gold bearing structures are highlighted by wide and extensive artisanal diggings with strike dimensions of plus 2 km in several sub-parallel zones of workings; this first pass round of drilling is designed to identify the width and strike potential of these zones at depth.

In area 5, also referred to as the Big South Target, at least three sub-parallel vein sets are being exploited by fairly recent, shallow artisanal diggings on quartz veins. Material between these veins is observed to host veinlets and alteration and represents the initial target at this prospect.

In areas 2 and 3, veining has also been identified by the presence of artisanal diggings and for the 2022 programme a series of ‘standby holes’ have been identified that would be drilled should access to the priority targets (mentioned above) be restricted due to poor access or rain events.

The Labola project is owned and managed by Moydow Holdings Ltd (Moydow). Panthera currently holds an equity interest of ~40% in Moydow. A proposed restructure of Moydow and farm-in by Diamond Fields Resources Inc (DFR) was announced on 25 August 2021 and is anticipated to be completed this 2Q 2022. Amongst other terms and conditions:

· DFR has agreed to spend up to US$18 million (Earn-In) on Labola and increase its ownership interest up to 80%; and

The Labola gold exploration project is in the Banfora greenstone belt of the West African Birimian Supergroup in southwest Burkina Faso. Labola is approximately 450km west-southwest of the capital, Ouagadougou, and 100km northeast of the Wahgnion gold mine, operated by Endeavour Mining.

Moydow has explored the area since August 2020, including acquisition and compilation of all previous data into a single database, interpretation of this data, target generation using the database and all the acquired remote sensing information, and a Reverse Circulation (RC) drilling program involving 31 holes. This culminated in the announcement of the maiden mineral resources estimate in 2021.

Gold mineralisation at Labola is related to quartz veining, areas of silica alteration and disseminated pyrite. A previous ground IP survey highlighted the coincidence between mineralised zones and high chargeability (sulfides) and resistivity (quartz veining and silicification) anomalies. This correlation outlines many additional opportunities for resource expansion drilling in the future.

The main targets are along the major interpreted central shear system encompassing the three mineralised zones. There is also strong evidence that there are several sub-parallel, additional structures that also host significant gold mineralisation as shown by artisanal workings. These targets can be considered as clearly defined for drill testing. Many of the targets are resource expansion opportunities as they are obvious extensions to identified resources and include areas with only widely spaced historical drilling. Additional targets include untested zones with artisanal workings and new zones as defined by soil geochemistry and/or Induced Polarisation surveys. Labola, therefore, represents an advanced exploration project with clearly defined drill targets that provide opportunities for exploration and resource expansion.

In March 2022, the Company announced that Moydow secured an interest in the Wuo Land 2 licence, substantially expanding the strategic land position. Since the acquisition of Wuo Land 2, several new targets, both along strike and parallel have been identified by Moydow.