We spoke again with Gervaise Heddle, CEO of Greatland Gold Plc (AIM:GGP) about today’s announcement that they have expanded their land ownership around the Havieron Project to include a number of new targets to Paterson East.

Gervaise explains the reasoning behind the decision to acquire this land and outlines their short to mid term plans for the project which has both Gold and Copper potential.

For more information on Greatland’s Havieron (and 4x other) projects please visit http://greatlandgold.com/projects/

·     Greatland more than doubles its landholding in the Paterson Region by securing  a new exploration licence covering an additional 224 square kilometres;

·     The new licence cements Greatland’s strategic position in a region that is experiencing increased exploration activity by a number of major industry players;

·     Greatland expects to employ modern geophysical methods across the new portfolio to refine targets prior to drill testing.

The Havieron project is located approximately 40 kilometres east of Newcrest’s Telfer gold mine which has produced over 27 million ounces of gold to date. Limited historical exploration by Newcrest in the late 1990s demonstrated high grade gold and copper mineralisation at Havieron with peak values of 15g/t Au and 2.5% Cu.

“We are very pleased to have extended our portfolio of new copper and gold targets near our Havieron project in Western Australia. This ties in with our stated strategy to increase shareholder value by the systematic evaluation of our existing resource assets, as well as the acquisition of suitable exploration and development projects. We look forward to updating the market as matters progress.”

A map showing the Havieron and Paterson Range East licences with regional targets and adjacent landholdings can be seen below: 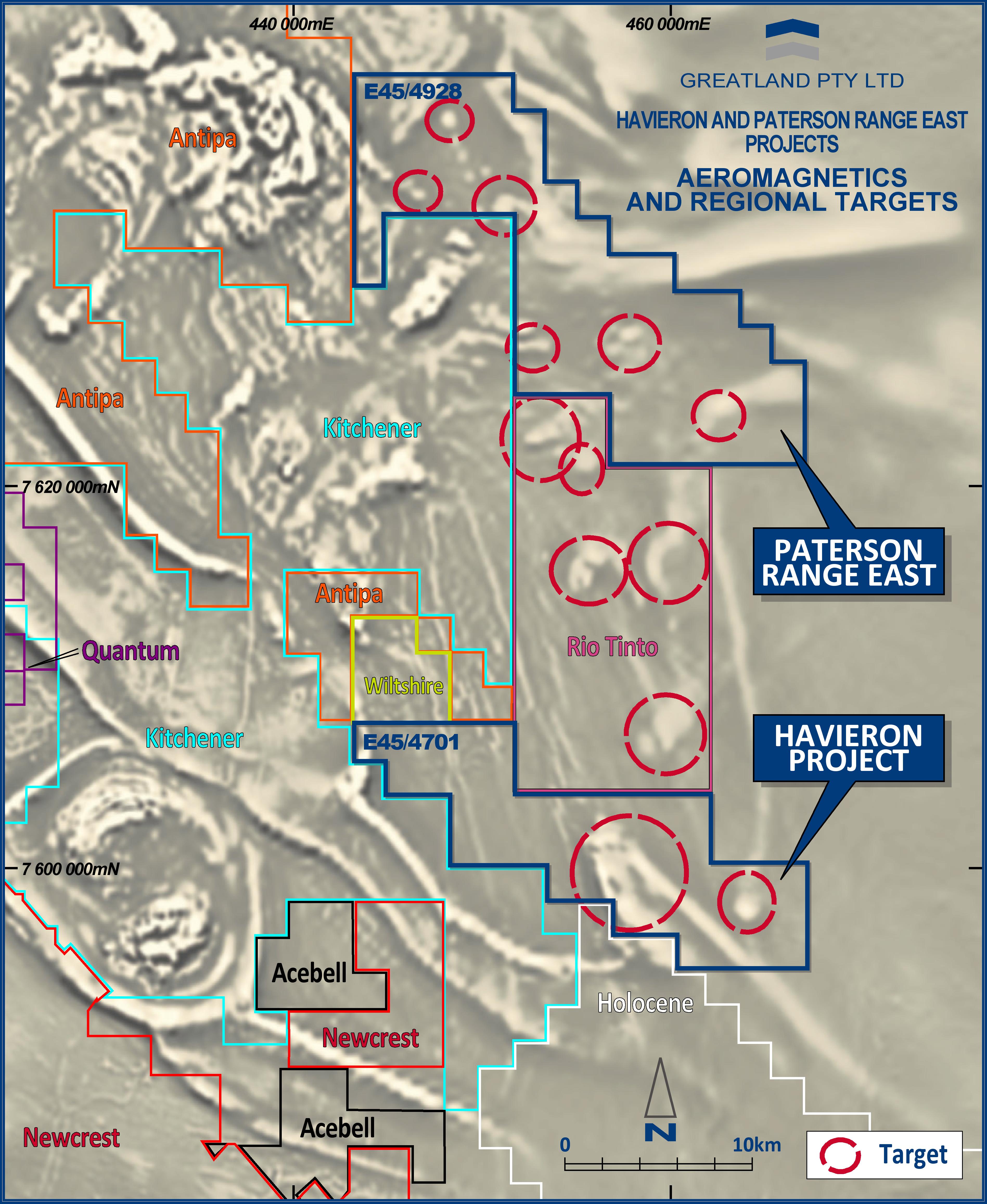 The Havieron and Paterson Range East licences are located in the Paterson region of northern Western Australia. The Paterson region hosts several large gold and copper deposits such as Telfer (27M oz) and Nifty (2MT copper). The region has been subject to more recent exploration which has outlined several other deposits including Magnum (Au), Calibre (Au), O’Callaghans (Cu) and Maroochydore (Cu).

The region is remote, however infrastructure is good with several operating mines, roads,formed tracks and rail networks nearby which branch out from the regional industrial hub of Port Hedland 500km to the west.

The Paterson Province is the northern portion of the Proterozoic Paterson Orogen. More recent exploration throughout several Proterozoic Orogens within the western parts of the Australian continent have resulted in the discovery of the large Tropicana gold deposit (7.9M oz) and large Nova nickel-copper deposit (10MT). Globally these Proterozoic Orogens are highly prospective for large deposits, and are often under-explored.

Geophysical data has outlined the Havieron target as covering approximately 1,000m x 1,000m. Depth to top of target is around 400m with these depths easily achieved with modern drilling equipment. Only six drill holes have been completed to date with all intersecting significant alteration and gold plus copper anomalism.

Thick lower grade zones of gold and copper have been intersected and within these gold grades peak at 15.4g/t and copper to 2.5%. Current drill hole spacing is broad and so the core of Havieron represents an immediate resource definition drilling target.

Within the Paterson Range East licence several IOCG targets have been identified. Historically, several of these targets have been subject to initial first-pass work and show promise at hosting mineralisation as seen at Havieron. Basement rocks do not outcrop and Greatland intends to employ modern geophysical methods to define targets prior to drill testing.

Prospectivity of the Paterson Province is widely recognised with several large industry participants present. These include Rio Tinto, Antipa and Newcrest. Greatland’s licences lie adjacent to Rio Tinto and Antipa.

TheBizLounge: Should you buy Aggreko just for the divi? Who will win the UK election?