Europa Metals, the European focused lead, zinc and silver developer, is pleased to announce, following its highly successful 2022 drilling campaign, a 19% increase to the Indicated Mineral resource and a 14% increase in grade, in respect of an updated independent Mineral Resource Estimate (“MRE”) for the Company’s 100% owned Toral Pb, Zn & Ag project (“Toral” or the “Toral Project”) in the Castilla y León region, northern Spain.

· A total of 61,545m of drilling is now included in the drillhole database for the Toral Project. This includes environmental monitoring drillholes, 174 diamond drillholes (including wedges) and 4 reverse circulation (RC) drillholes.

The Board of Europa Metals believes that the results of this latest update compare very favourably with the Company’s previously reported Mineral Resource Estimate, announced on 1 October 2021, as it represents a:

· 39% increase in Indicated contained tonnes of zinc to approximately 349,000 tonnes;

· 33% increase in Indicated contained tonnes of lead to approximately 260,000 tonnes; and

“Toral’s latest resource upgrade is a great achievement for the Europa Metals’ team. We have now delineated 7Mt of Indicated resources at a much improved overall grade (approximately 14% increase) following the recently reported success of holes TOD-041 and TOD-042. This will enable the project team to now utilise a substantial tonnage of independently reported Indicated Mineral Resources in the mine plan for the upcoming mining licence application scheduled to be delivered by 31 July 2023 to the Junta of Castilla y León”.

This latest updated independent MRE, effective as of 5 November 2022, for the Toral deposit is set out in the table below. It is reported at a cut-off grade of 3.5% Zn (PbAg) equivalent, to encapsulate resources that are considered to have a reasonable prospect of eventual economic extraction, however a cut-off grade of 4% Zn (PbAg) is to be taken forward as the base case for resource reporting. 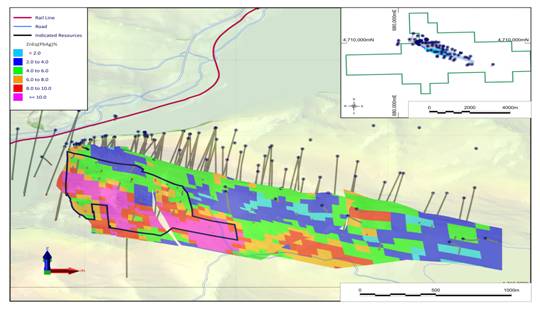 3.  The Indicated and Inferred mineral resource categories for the Toral lead-zinc-silver project set out in the table above (at cut-off grades >3.5% Zn Equivalent) comply with the resource definitions as set out in the Australasian Code for Reporting of Exploration Results, Mineral Resources and Ore Reserves. The JORC Code, 2012 Edition. Prepared by: The Joint Ore Reserves Committee of The Australasian Institute of Mining and Metallurgy, Australian Institute of Geoscientists and Minerals Council of Australia (JORC).

4.  Numbers are rounded to reflect the fact that an Estimate of Resources is being reported. Rounding of numbers may result in differences in calculated totals and averages. All tonnes are metric tonnes.

5.  Zn equivalent calculations were based on 3 year trailing average price statistics obtained from the London Metal Exchange and London Bullion Market Association giving an average Zn price of US$2,865/t, Pb price of US$2,053/t and Ag price of US$22.17/oz. Recovery and selling factors were incorporated into the calculation of Zn Eq values. It is both the Company’s and Competent Persons’ opinion that all the elements included in the metal equivalents calculation (zinc, lead and silver) have a reasonable potential to be recovered and sold.

7.  Zn Eq is the calculated Zn equivalent using lead credits and does not include silver credits (Zn Eq = Zn + Pb*0.842).

9.  The Mineral Resource Estimate set out above for the zinc, lead and silver mineralisation in the Toral Project area is based on a 3D geologic model and wireframe restricted block model that integrated the exploration work on the Toral Project up to 5 November 2022 . The block model used a cell size of 25m along strike (east) and down dip (vertical) in areas of more dense sampling, a cell size of 50m was used elsewhere. A single cell dimension was used over the width of the mineralised unit. The block model was rotated by 20° in plan view to best match the trend of mineralisation. Sub cells were applied to better fit the wireframe solid models and preserve accurate volume as much as possible. Cells were interpolated at the parent block scale using a Median Indicator Kriging method. The estimate was completed using Micromine 2022.5 software.

10. No Top Cuts were applied to the 2m downhole composite data used for grade estimation. A broad linear relationship between Pb+Zn grade and Bulk Density was identified from scattergrams and the formula 2.7 + 0.02(Pb+Zn%) used to estimate block density in relation to block grade within the block model, density was capped at 3.5 g/cm3.

11. The block model was restricted with wireframes representing the main mineralised structure at Toral which is located along a Carbonate-Shale contact, an approximate 0.4%Pb+Zn cut-off grade was used for modelling. Wireframes were generated using Micromine’s implicit vein modelling tool and were restricted to the topography.

12. The updated Mineral Resource Estimate includes new data from drillholes TOD-041 and TOD-042. A total of 61,545m of drilling is included in the drillhole database for the Toral Project. This includes environmental monitoring drillholes, 174 diamond drill holes (including wedges) and 4 reverse circulation (RC) drillholes in addition to 19 underground channel samples for 18.75m. Average core recovery is approximately 80% and is in excess of 95% for Europa Metals drilling.

13. Drill and UG channel sample data spacing across the current resource area ranges from approximately 50-100m x 50-100m centres within the most densely tested area situated in the NW, stepping out to approximately 200m x 200m within the mid-section and 100-200m x 500m in the SE.

14. To the northwest the resource is truncated by the licence boundary and extends approximately 10m past the south easterly most drillhole which was mineralised but contained sub-economic grades (3m at 2.4% ZnEq). The total strike length of the modelled mineralisation within the licence area is approximately 3.1km. The structure remains open to the southeast. Down dip the model was extrapolated approximately 50-200m below the deepest sample in the northwest and central parts of the deposit, and approximately 250-280m below the deepest sample in the southeast with consideration of depths tested along strike to the northwest. The model’s extent is from surface to a range of approximately 800 – 1,150m below the surface. Extents of extrapolation are considered appropriate for the level of information, deposit type, strike and depth extents tested, observed and geostatistical grade continuity and the assigned resource classification.

15. The updated MRE compares favourably to the previous MRE as of 14 September 2021 and represents an increase in Indicated Resources of 1.1 million tonnes, from 5.9 million tonnes. The aggregated Inferred and Indicated tonnages remain unchanged. Individual Lead, Zinc and Silver grades have also increased from 4.2%, 3.3% and 27 g/t to 5%, 3.7% and 29 g/t within the Indicated Resources. 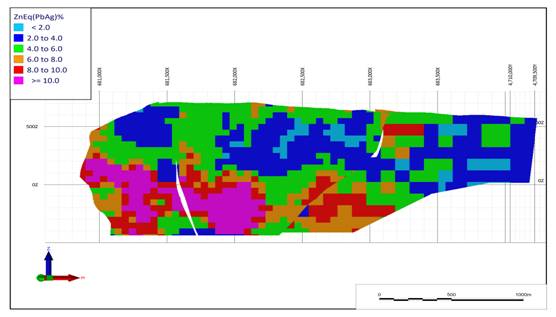 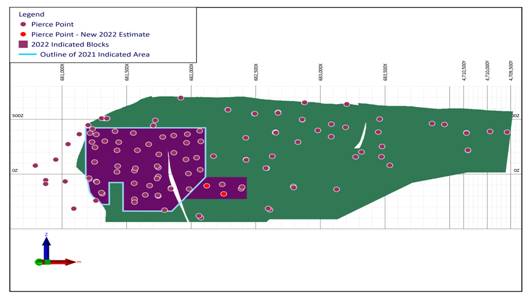 In addition, the Company is pleased to announce that an updated investor presentation in respect of the recent farm-in/joint venture arrangement with Denarius and this updated independent mineral resource estimate is available to view on the Company’s website at: www.europametals.com/site/news-announcements/presentations

This updated Toral resource estimate was prepared by Mr R.J. Siddle, MSc., MAIG, Principal Geologist for AMS, an independent Competent Person within the meaning of the JORC (2012) code and a Competent Person under the AIM guidance note for mining and oil & gas companies. Mr Siddle has reviewed and verified the technical information that forms the basis of, and has been used in the preparation of, the updated Mineral Resource Estimate and this announcement, including all analytical data, diamond drillhole logs, QA/QC data, density measurements and sampling, diamond and RC drilling and analytical techniques. Mr Siddle consents to the inclusion in this announcement of the matters based on the information, in the form and context in which it appears. Mr Siddle has also reviewed and approved the technical information in his capacity as a Qualified Person under the AIM Rules for Companies. Additionally, Mr Siddle confirms that AMS is not aware of any information or data that materially affects the information contained within the Company’s previous announcements referred to herein.

For further information on the Company, please visit www.europametals.com or contact: