· The results from a soil sampling programme covering c.11% of Bradda’s San Domingo pegmatite claims in Arizona have identified highly-prospective follow-up lithium targets over a 3km+ strike (see Figure 1 and 2 below) with the same elemental signatures that have been seen at known lithium mineralisation locations globally. The soil geochemistry suggests that the pegmatite swarm is largely of the LCT (lithium-caesium-tantalum) mineralisation type, the most significant for lithium deposits and what is commonly associated with economic occurrences of lithium and tantalum. LCT-type pegmatites are found in the Western Australian pegmatite district, like Tianqi and Albemarle’s joint-venture Greenbushes lithium mine.

· Bradda Head carried out a soil sampling programme covering just under 3km2 of the northern claim block at San Domingo in order to support future drill hole targeting and better understanding of our 23km2 of pegmatite ground in Arizona. As announced on 8 August 2022, the Company is now planning the next phase of this soil sampling programme to cover the remaining 20km2 of Bradda’s San Domingo pegmatite project in Arizona.

· Key potential lithium pegmatite identifier elements were analysed for, including; lithium, niobium, caesium, and rubidium. The Midnight Owl Mine, which has been historically mined at surface and has known lithium mineralisation, is where the Company is currently drilling and returning strong anomalies associated with these elements. See Figure 2 and 3 below.

· Importantly, ratios present in the soils of elements associated with pegmatites and lithium mineralisation highlight targets for potential follow-up. The maps below show the areas of interest and, crucially, demonstrate a 9km NE-SW trend, which may continue through the remainder of Bradda’s 20km2 of claims and state MEPs in Arizona, which have not had detailed soil sampling. See Figure 1 below. This should have a very positive impact on the scale potential at San Domingo.

· Permitting is also underway at the Company’s state Mineral Exploration Permits (MEPs), and expansion programmes are being formulated on the Bureau of Land Management (BLM) claims where Bradda is currently carrying out diamond core drilling.

· Drilling is progressing well at San Domingo; we are 50% through the programme. Samples are being assayed currently, and results will be released before year-end once sufficient mass is received. 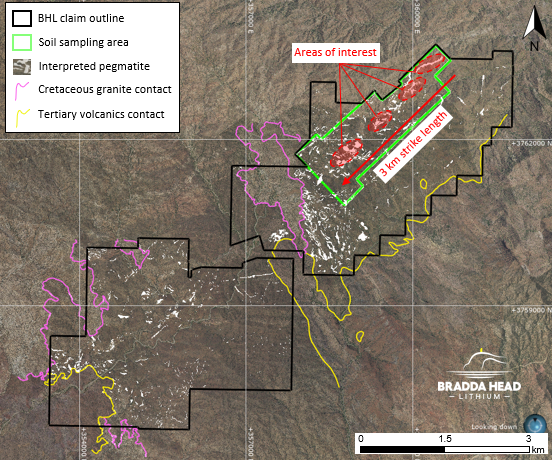 “The soil results indicate excellent targets beyond the current drilling plan, and are a further piece in the puzzle to help us understand the size potential we have at San Domingo and in unlocking the value at this lithium-bearing pegmatite opportunity in Arizona. The US is investing $135bn in developing its domestic EV and critical mineral supply chain, and our San Domingo pegmatite project is ideally situated to help with that supply and to potentially benefit from Department of Energy funding.

“This soil sampling programme is another critical tool used in drill hole targeting and in confirming the prospectivity of our project at San Domingo. Alongside our pegmatite project, we are driving growth at our Basin lithium-in-clay project, with an updated resource due before year-end. Bradda’s mix of pegmatite, clay and brine assets is a big de-risker for any investor. The recent TSX-V listing will also help to further broaden our shareholder base.

“This first drill programme at previously un-drilled areas is progressing well. Assay return times are still slow in the US due to an exploration boom over the last 2 years, but what we have seen so far has been promising, giving us confidence to implement exploration, permitting, and diamond drilling follow-up targets. With drilling firmly underway we look forward to updating the market before the end of the year.”

The Company carried out a soil sampling programme across an area covering just under 3km2 in the northern claim area at San Domingo, which will assist future drill hole targeting and confirming prospectivity of the San Domingo project as a whole. The soil sampling was carried out in a grid pattern, with samples taken at 50m spacings along north-south lines which were spaced 100m apart.

Key potential lithium pegmatite identifier elements were analysed for, including lithium, niobium, caesium, and rubidium. The soil sampling results demonstrated the potential for further follow-up programmes at San Domingo as similar prospective elemental signatures were identified across the area sampled. The soil geochemistry suggests that the pegmatite swarm is largely of the LCT (lithium-caesium-tantalum) type, the most significant for lithium deposits.

The Company is currently drilling in Arizona, where its 30-hole drilling programme at San Domingo in Central Arizona, commenced in August. Drilling is progressing well at San Domingo; we are 50% through the programme. Samples are being assayed currently, and results will be released before year-end once sufficient mass is received. 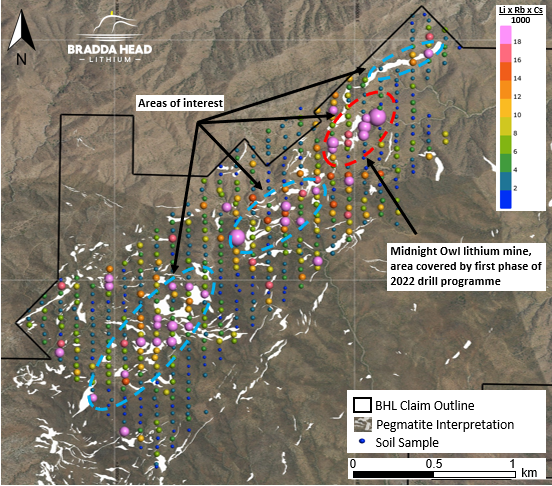 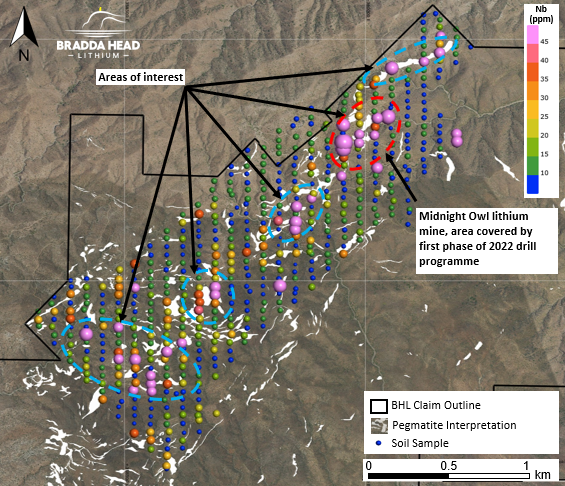 The geological information contained in this news release has been verified and approved by Jim Guilinger, COO Bradda Head Lithium. Mr. Guilinger is a Qualified Person as defined by National Instrument 43-101, Standards of Disclosure for Mineral Projects of the Canadian Securities Administrators.