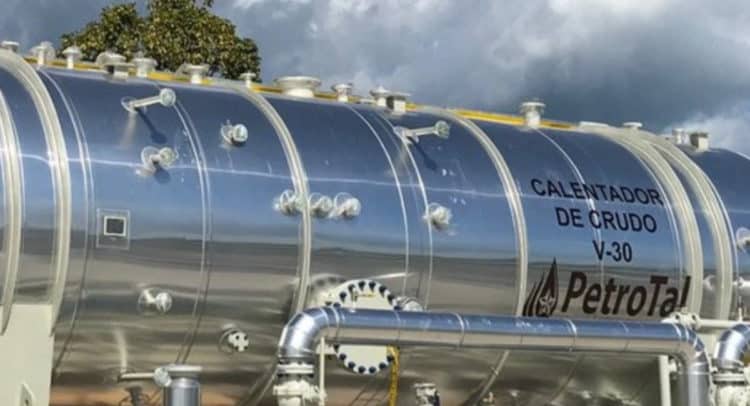 · Well 11H was put on production June 30, 2022, and has averaged approximately 9,550 bopd over its first four producing days with an estimated payout in early August 2022;

· Well 11H was drilled and completed for an estimated $13.8 million, on budget, with total depth reaching approximately 4,300 meters inclusive of the horizontal section of 1,125 meters, and was completed with Autonomous Inflow Control Device (“AICD”) valves;

· The latest four-day average production ending on July 3, 2022, was a record 22,376 bopd, with a peak production of 26,000 bopd. To accommodate sales availability, the Company expects to maintain production between 18,000 and 19,000 bopd with Brazilian exports increasing until the ongoing Northern Peruvian Pipeline (“ONP”) repairs are completed, which is expected by September 2022;

· The final Brent oil price for the 719,961 barrel lifting from Bayovar, announced on June 16, 2022, was $114/bbl using the average ICE Brent oil price for the final ten days of June 2022, inclusive of usual pricing adjustments, thereby finalizing true up revenue of approximately $53.9 million, which is expected to be received in August 2022;

· Total cash at June 30, 2022 was $77.0 million, including $16.2 million of restricted cash. Estimated accounts receivable and accounts payable at the quarter end were approximately $88 and $50 million, respectively; and,

· Perupetro has recently announced that it will formally include an addendum in the Block 95 License Contract including the proposed 2.5% social trust, completing a major administrative step for this social initiative.

Q2 2022 was a strong operational period for the Company, having unconstrained production for the majority of the quarter. Production was supported with strong oil rates from wells 8H, 9H, and 10H, each flowing between 3,000 and 4,000 bopd with well 11H commencing production on June 30, 2022 at an initial four-day average of 9,550 bopd. Well 11H was drilled and completed for an estimated $13.8 million, which was on budget, and with total depth of approximately 4,300 meters, inclusive of the 1,125 meter horizontal section.

The ONP is still undergoing maintenance, which Petroperu expects to have completed by September 2022. During this time, the Company anticipates restraining approximately 20% of field production which will be restored as 11H’s flush production diminishes and as Brazilian exports are increased during this quarter. As a result, the Company is targeting an overall production range of 18,000 to 19,000 bopd for the third quarter.

The robust forward free cash flow profile, combined with the strong June 2022 exit liquidity and the recently executed Bayovar oil lifting, should minimize the impact of having to temporarily constrain production to manage sales capacity. The Company remains on target to execute its debt repayment strategy in Q4 2022 or Q1 2023, which will allow an accretive shareholder return policy to be examined and approved in Q4 2022, if it is, as expected, economically viable.

“PetroTal has now achieved its seventh straight quarter of production growth and has delivered another production record, growing 21% in the quarter. 11H’s early technical assessment estimates it will achieve an investment payout by early August 2022 at current Brent oil prices and, like our other wells, help deliver a robust free cash flow profile thereafter. Given our strong liquidity profile we are actively assessing the Company’s ability to put in place an accretive shareholder return policy upon payout of the bonds, which we look forward to communicating about later in 2022. We are also very excited about the agreement to include our social trust initiative into the Block 95 petroleum license, thereby accepting the concept into rule of law.”

PetroTal is a publicly traded, tri‐quoted (TSXV: TAL, AIM: PTAL and OTC: PTALF) operationally prudent and sustainable Peruvian oil and gas operator that owns 100% working interest in Blocks 95 and 107 with its current development focus at the Bretana oilfield in Block 95. The Company is headquartered in Houston, Texas with an operational and legal offices in Lima Peru and Calgary Alberta, respectively. Over a period of four years, starting in late 2017, the PetroTal team was able to take a greenfield resource project and transform it into Peru’s largest crude oil producer reaching over 20,000 bopd in December 2021. PetroTal now has a substantial and de-risked repeatable drilling inventory to provide investors with free cash flow and growth for many years ahead while actively building new initiatives to champion ESG development. For further information, please see the Company’s website at www.petrotal-corp.com, the Company’s filed documents at www.sedar.com, or below: