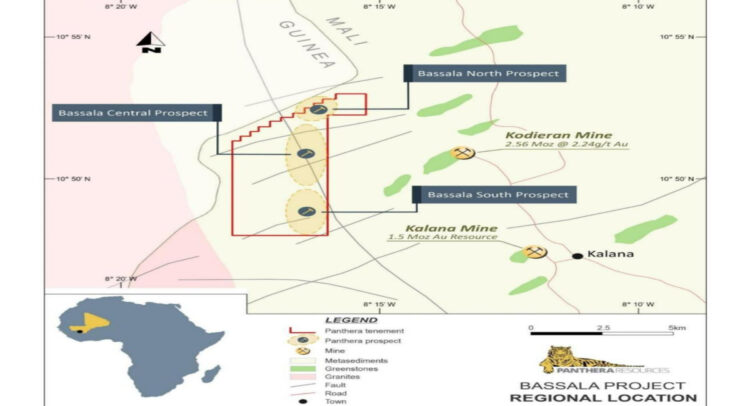 Gold exploration and development company Panthera Resources Plc (AIM: PAT), with assets in West Africa and India, is pleased to announce the drilling programme, as announced on 6 June 2022 at the Bassala Project in Mali has now ended with all samples delivered to the assay laboratory.

“The continued and rapid progress at Bassala is a credit to our operations team in Mali. The project has been accelerated from a grassroots prospect through a gold in soil and geophysics survey, and two drilling programmes in 2021 for 18935 metres. The June 2022 AC drilling programme, comprising 5631 metres, was again completed on time and within budget with no safety incidents reported .

The Basala project has a large number of mineralised targets with three areas prioritised for follow-up AC/RC drilling in this programme. Logging of drill cuttings has observed strong quartz veining and alteration (sulphide or limonite after sulphide, chlorite and silica). We look forward to the assay results expected later in the quarter.”

The June 2022 drill programme was designed to follow up results of the earlier drilling in the three separate prospect areas in the Bassala project, these being named ‘Bassala North’, ‘Bassala Central ‘and ‘Bassala South’. Panthera is pleased to report the current program was completed ahead of schedule, on budget and without any safety incidents.

In the Bassala South prospect at least two subparallel zones trending NNW – SSE have been highlighted with:

· structures identified from the geophysical survey; and

These structures or targets have now been drill tested with deeper RC drilling and further AC geochemical testing and downhole logging suggest zones of quartz veining may represent depth extensions of mineralisation seen in surface geochemistry and the shallower air core drilling.

Exploration in the Bassala Central prospect is targeting the deeper structures identified in earlier work and highlighted by several artisanal zones of workings that are also located on the north-south structures as interpreted from the gradient array IP survey.

In the Bassala North prospect, several RC holes were drilled to test the southern strike of areas of artisanal workings while AC drilling followed up on the 2021 drilling anomalies, geophysical structure, and artisanal digging targets.

The current programme has successfully identified that sub-vertical quartz veining occurs and subject to positive analytical results will be the basis for target planning in the next phase of targeted exploration.

Logging of drill cuttings has supported our targeting rationale for this phase of drilling with strong quartz veining and alteration (sulphide or limonite after sulphide, chlorite and silica) observed at the targets tested. Sulphides are generally represented by boxwork textures or limonite replacing sulphides, but occasionally fresh pyrite and/or arsenopyrite have been logged.

A total of 1,350 composite samples have been collected from the air-core and RC drilling (including standards, duplicates and blanks) have been despatched to SGS Laboratory in Bamako and are currently being assayed for gold via low-level detection (1ppb Au) fire assay. It is planned to re-assay gold mineralised intersections at 1 metre intervals.

It is expected that the assay results will be received during 3Q 2022.

The Bassala project is located within the highly gold-endowed Birimian volcano-sedimentary belt in southwestern Mali, approximately 200km south of the capital city Bamako.

In the second half of 2020, the Company recommenced exploration activity at Bassala with the results of gold-in-soil and ground magnetic surveys announced on 26 March 2021. These surveys confirmed that two major gold anomalous trends are present, a 9-kilometre long north-northeast trending zone and a second, cross-cutting, 3-kilometre northwest-trending zone. These zones appear to be continuations of significant regional mineralisation trends.

Following the successful gold-in-soil and ground magnetic surveys, the Company initiated an IP survey with the results announced on 10 June 2021. The IP survey confirmed the previous interpretations and identified:

AngloGold subsequently undertook broad-spaced RAB drilling over the main soil anomalies and a total of 3,111m was completed in 113 drill holes at an average depth of 27.5m. The drilling identified significant mineralisation beneath the laterite cover, including:

That work resulted in widespread gold mineralisation being identified in very widely spaced drill traverses with better intercepts from the 5m composite sampling including:

These were excellent initial results from the broad-spaced, drill pattern that only penetrated to the base of

Given the excellent results from the June 2021 drilling programme, the Company continued the drilling programme after the wet season and the phase 2 programme (mainly situated in the northern part of the license area), consisting of 8,546m drilling in 152 AC drill holes, was completed in late 2021. Further details of this drilling may be found in the RNS’ dated 9 December 2021, 14 January 2022 and 17 February 2022.

Assay results from this drilling included the following intercepts: