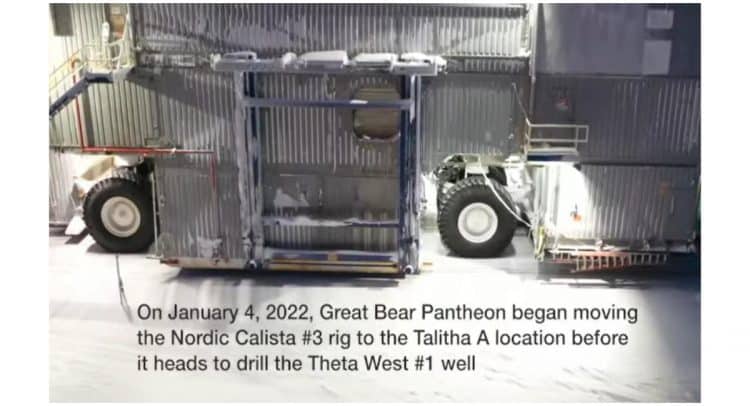 Pantheon Resources plc (“Pantheon” or “the Company”) (AIM: PANR), the AIM-quoted oil and gas company with a 100% working interest in a number of oil projects spanning c. 153,000 acres immediately adjacent to transportation and pipeline infrastructure on the Alaska North Slope (“ANS”), is pleased to announce the following operations update:

A link to a video of the rig being mobilised is available to be viewed at https://www.youtube.com/watch?v=-_Pk6ep7IPI Pantheon’s upcoming programme and near-term objective is to prove the resource at Theta West and the commercial potential of its discovered resources at its Talitha and Greater Alkaid projects. Pantheon has a 100% working interest in each of these projects. Post the recent capital raising, Pantheon is now funded to execute the evaluation of these potentially large resources, currently estimated by management to contain a combined 17 billion barrels of oil in place with an estimated recoverable volume of 2.2 billion barrels of oil. The 2022 work programme will involve the following:

i. Testing of the multiple oil zones confirmed by Pantheon at Talitha #A;

Talitha #A will test several oil bearing zones that were encountered in 2021, when Talitha #A confirmed oil accumulation s previously discovered by the Pipeline State #1 well, drilled by Arco Alaska in 1988 . S everal distinct stratigraphic oil zones were identified at Talitha # A which have been further defined using advanced seismic petrophysics, a technology that integrates petrophysics, geophysics and geology. The Talitha #A well confirmed five potentially productive zones, from deepest to shallowest as follows: (i) Kuparuk, (ii) Lower Basin Floor, (iii) Upper Basin Floor Fan, (iv) Slope Fan and (v) Shelf Margin Deltaic. In 2021, the Company was only able to test the deepest of these zones, the Kuparuk Formation, as operational issues extended testing operation to the end of the drilling season when operations were suspended. The current testing programme will focus on the four normally pressured shallower Brookian zones (zones (ii) to (v) above) which are all secured behind casing. These four zones are all geologically independent of the Kuparuk, have all confirmed the presence of light oil, and will be flow tested as part of the upcoming programme. The Kuparuk, which the Company believes to offer significant potential, will form the focus of a future well.

The data obtained during drilling of Talitha #A is of exceptionally high quality and has been analyzed by Pantheon’s geologic, geophysical and engineering teams, supplemented by the independent analysis undertaken by AHS (Baker Hughes). This analysis has confirmed the presence of continuous stacked light oil-bearing (35+ API) reservoir zones over a 3,700 feet (“ft”) interval starting at the regional top seal above the Shelf Margin Deltaic reservoir zone down to 10,456 ft. The objective of the testing operation is to confirm movable oil within these formations. Development within any of these formations will be done using horizontal wells positioned in better locations.

Pantheon estimates the Theta West basin floor fan (BFF) on a 100% basis has the potential to contain 12.1 billion barrels of Oil in Place and a P50 Recoverable Resource 1 of 1.41 billion barrels of oil on Pantheon’s acreage. If successful, Theta West has the potential to be of very significant value to the Company. Talitha #A confirmed the Theta West structure as being oil bearing on the distil flanks of the structure. The Theta West #1 well location is approximately 8.5 miles and 1,500 ft structurally higher and “up dip” of the Talitha #A discovery, in what is believed a superior geologic location.

The Alkaid Project has discovered oil in two independent zones; (i) the shallower Brookian (‘SMD’) and (ii) the deeper Brookian (‘Alkaid Deep’) zones. The Alkaid #2H well, planned for mid 2022, will be an appraisal well to further define the resource potential of the accumulation, to obtain valuable reservoir and production data, and if successful, be Pantheon’s first oil production on the ANS. Pantheon estimates the resource potential of these two zones combined to be 3.5 billion barrels of oil in place with 480 million barrels recoverable. The recent oil discovery at Talitha #A in the Shelf Margin Deltaic formation upgraded the potential for the Shelf Margin Deltaic to produce oil on the Greater Alkaid structure.

The Company plans to use an early production unit as part of a pilot testing operation to yield early cash flow as well as acquire valuable production data to assist future development planning. The Greater Alkaid oil accumulation sits underneath and adjacent to the Trans Alaska Pipeline and the Dalton Highway making it uniquely ideal for year-round “Phased Development”, minimising cost and offering early production potential with significant advantages to other remote oil field developments on the ANS.

“It is now full steam ahead on the Alaskan North Slope with the commencement of a major work programme that is both funded and significantly de-risked after a decade of investment where some $300 million has been invested to date. As outlined above, the 2022 programme targets some 2.2 billion barrels of recoverable oil, which has enormous implications if successful. All permitting for Talitha and Theta West has to date progressed to plan with all remaining standard permits expected in time for the scheduled commencement of drilling operations.

“I remind shareholders that Pantheon’s assets are all located on State and not federal lands. Pantheon’s geographic location, in close proximity to the existing production and export infrastructure, enhance not just the commercial potential of its resources, but also minimise the potential of environmental and federal disruption experienced by other operators on federal lands. We are pleased to have received formal approval of our Plans of Operations at Theta West and Talitha and continue to work closely with the State of Alaska on all aspects of our operations.

“The work accomplished last winter means we return to the North Slope with our assets substantially de-risked. The drilling of two new wells, and possibly a third, as well as re-entering and testing the Talitha #A well, has the potential to create significant value for our Company. I am proud of our team for the hard work it has taken to get to this point and look forward to updating the market as drilling commences.”