Oriole Resources PLC, the AIM-quoted exploration company focussed on West Africa, is pleased to provide an update for its 90%-owned exploration projects in Cameroon.

The Company is focused on the Bibemi gold orogenic project (‘Bibemi’) in the north of the country and the Central Licence Package project (‘CLP’) in central Cameroon, which is prospective for gold and other valuable commodities.

· A pit optimisation study and site visit are currently underway to upgrade a portion of the existing JORC Exploration Target to a maiden Mineral Resource Estimate (‘MRE’), which is expected to be in the JORC Inferred category;

· The Company anticipates announcing the maiden MRE before the end of this year;

· An infill geophysics programme is planned for H1-2023, to aid drill targeting at the remaining three prospects on the Bibemi licence as well as future resource-expansion activities.

· Mapping and rock-chip sampling is currently under way at Mbe, one of five licences within the Eastern CLP block, where soil sampling to date has identified a c.12.5km long by 3km wide gold-mineralised corridor (announcement dated 17 August 2022) ;

· Results from mapping over former soil sampling Grid 6 at Mbe, have guided the selection of a further 495 (of a total 835) unanalysed samples that were collected during the 2021/22 field season and have the potential to extend the mineralisation at Mbe. The samples will be submitted for analysis shortly, with results anticipated in Q1-2023;

· Ground-based geophysics is planned at Mbe for Q1-2023 to help identify the structural control on the mineralisation;

· At the Ndom licence, also in the Eastern CLP, the team is currently completing a ground-truthing exercise to assess the potential for lithium-bearing pegmatites following anomalous geochemical data reported from the 2021/22 stream and soil programmes;

· A further licence, Gamboukou, immediately to the south of Ndom, has recently been secured by the Company for the exploration of gold, lithium and other elements and initial studies are underway;

· The Company is in discussion with the Mining Ministry of Cameroon in respect of temporarily suspending the three Western CLP licences, and all the Company’s operational and financial obligations thereunder, pending a resolution to the ongoing land access issues.

Oriole CEO, Tim Livesey, said:  “We are delighted to have mobilised the teams and be active again at the beginning of the field season, following the end of the rains in Cameroon.

“The work underway to upgrade the Bibemi JORC Exploration Target into a JORC Resource is a very significant step for Oriole and for the developing exploration sector in Cameroon. To our knowledge, this discovery and transformation of an exploration asset into a maiden JORC MRE will be the first internationally-accredited Mineral Resource for orogenic gold targets in Cameroon.

“In a previously overlooked exploration jurisdiction like Cameroon, this rapid assessment of greenfield opportunities allows first movers like Oriole the advantage of identifying and securing prime land positions, which is exactly what we have done, with our Central Licence Package now extending to over 4,000 km2.

“At the Eastern CLP licences, stream and soil sampling has already identified significant gold anomalism and this field season will be focused on targeting the source of that anomalism through mapping, sampling and geophysics. The further identification of anomalies in other commodities, such as lithium, offers the potential for value addition through diversified exploration or future partnerships with commodity-specific groups.

“At the Western CLP, as a short-term measure to address ongoing land access issues, the Ministry has suggested a temporary suspension of licence activities to allow a resolution to be found. We see this as a very pragmatic approach and welcome the Minister’s suggestions and support on this matter.

“In the meantime, our teams will continue to focus on the existing newly identified targets in the Eastern CLP, as well as the more advance Bibemi project, and we look forward to reporting on our continued activities as we progress in to the 2022/23 field season.”

During the 2022/23 field season, the Company will continue to focus its operations on grassroots exploration at the Bibemi and CLP projects in  Cameroon. 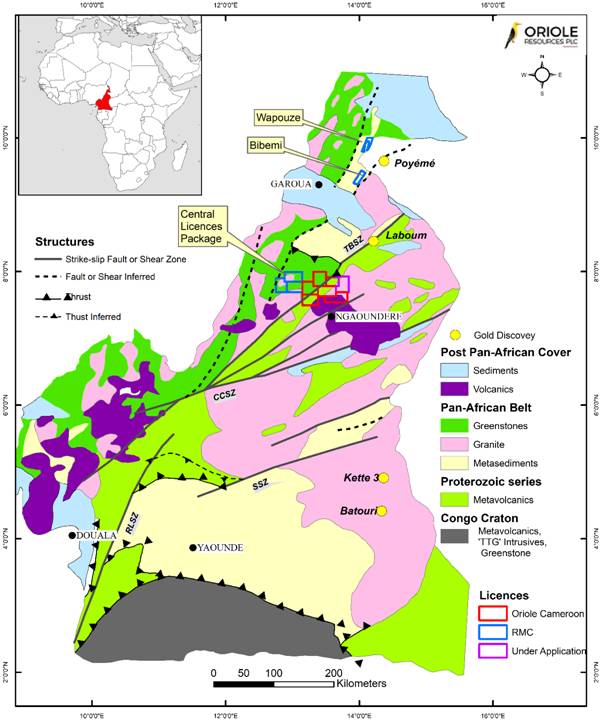 In October 2022, the Company reported a maiden JORC-compliant Exploration Target for the Bakassi Zone 1 prospect of between six million tonnes and eight million tonnes at grades ranging from 1.50 to 1.70 g/t Au for between 290,00 and 440,000 oz Au. Within this model, prepared by independent consultant Forge International Limited (‘Forge’), mineralised zones with a true width of up to 36.32m have been reported.

The Company today reports that Forge, together with its associate Axe Valley Mining Consultants Ltd, is completing a pit optimisation study to convert the Bakassi Zone 1 Exploration Target into a maiden MRE. This is expected to be in the Inferred category and will be reported to the market later in December, following completion of the Competent Person site visit that is currently in progress.

Looking ahead to 2023, the Company anticipates completing a n infill geophysics (magnetic) survey during the first half of the year. Results of the initial survey, whilst useful for targeting holes during the Phase 4 drilling programme, showed a number of open-ended anomalies within the Lawa East and Lawa West prospects and at the margin of the Bakassi Zone 1 grid. The infill programme aims to fill the gaps in our data and provide a wider, more accurate view of the controlling structures at the remaining three prospects on the licence. It will also assist the team in developing its Resource-expansion activities.

For further information on the Bibemi project, including a JORC Table 1, please see the following page of the Company’s website: https://orioleresources.com/projects/central-licence-package/ .

At the CLP project, located in the centre of Cameroon, nine contiguous licences (six defined as Eastern CLP and three defined as Western CLP) cover a land package that has significant potential for orogenic and epithermal style gold mineralisation. Recently published maps by a World Bank-funded prospectivity programme, ‘PRECASEM’, have confirmed that the CLP project overlies the highest priority gold district identified by the programme. 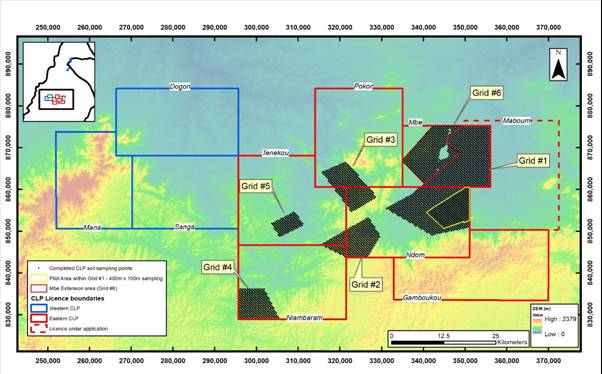 The Company today reports that 1/15,000 scale mapping and rock-chip sampling is currently underway over a c.48km2 area at Mbe to help constrain the source of the gold anomalism, which appears to have an east-northeast structural control. Mapping has already been completed over former soil sampling on Grid 6 and the results have guided the selection of 495 (of a total 835) samples that were collected during the 2021/22 field season but have not yet been analysed. Given the location of Grid 6, immediately to the southwest of the 12.5km-long anomalous corridor, there is potential to further extend the gold mineralisation at Mbe. The samples will be submitted for analysis shortly, with results anticipated in Q1-2023. Once mapping is complete at Mbe, the team will move to the other targets identified within the licence package. 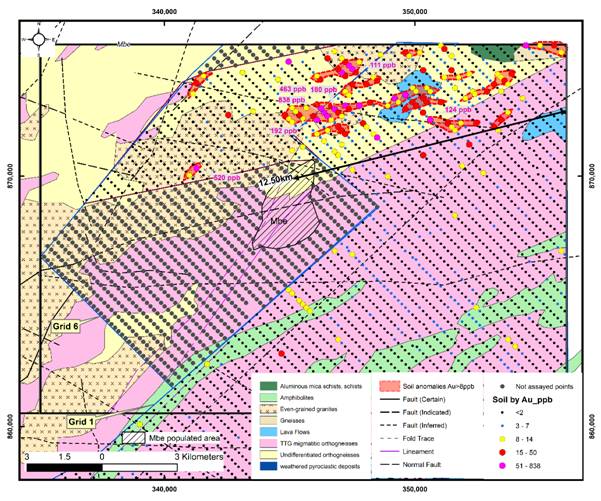 Figure 3: Gold-in-soil anomalism identified to date at the Mbe target within the Eastern CLP

A ground-based magnetic survey is also being planned at Mbe for Q1-2023 in order to help identify structures that could further assist in defining the geological context of the gold anomalism at the prospect. The survey will be carried out on northwest-southeast (N140 ˚ ) lines spaced 100m with survey point spacing of 20m.

As previously reported, a review of multi-element data for the Grid 1 stream sediment and soil sediment samples identified the potential for non-precious metals to occur within the Eastern CLP (announcement dated 21 July 2022). More specifically, anomalous lithium-in-soil values (up to 84 ppm) have been identified in association with a porphyritic granite. A field reconnaissance programme is underway to review whether there are pegmatite and aplite dykes within the granite that could explain the concentration of lithium. These studies are also underway at the newly-granted Gamboukou licence, immediately to the south of Ndom. Gamboukou was targeted on the basis of having similar geology and potential to Ndom and is prospective for gold, lithium and other elements. Field reconnaissance at both licences will be followed by more detailed mapping and rock-chip sampling.

The total area under licence at the CLP now stands at 4,091km2 and the application for the Maboum permit, immediately to the east of Mbe, is still awaited. 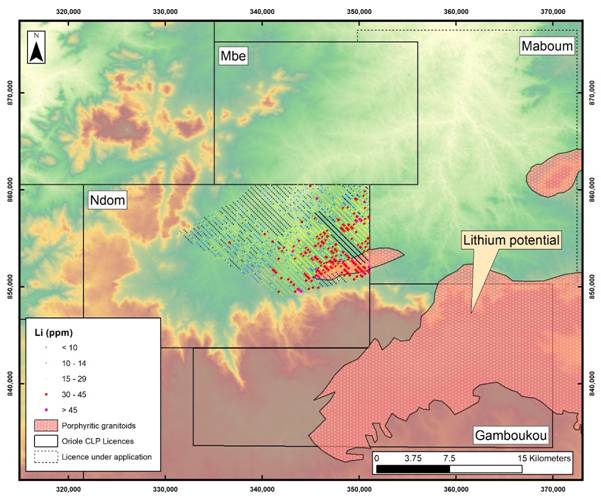 Figure 4: Lithium anomalism identified to date within the Eastern CLP

Finally, in light of the ongoing land access issues in the three Western CLP licences (announcement dated 28 September 2022), the Company is in discussion with the Mining Ministry of Cameroon in respect of temporarily suspending them, and all the Company’s operational and financial obligations thereunder, until a resolution is found.

For further information on the CLP project, including a JORC Table 1, please see   the following page of the Company’s website   https://orioleresources.com/projects/central-licence-package/.

The information in this announcement that relates to the Exploration Target is based on data compiled by Mr. Robert Davies, EurGeol, CGeol, an independent consultant to Oriole. Mr Davies is a Director of Forge International Limited. Mr Davies has sufficient experience that is relevant to the style of mineralisation and type of deposit under consideration and to the activity being undertaken to qualify as a Competent Person as defined in the 2012 Edition of the “Australasian Code for Reporting of Exploration Results, Mineral Resources and Ore Reserves”. Mr Davies consents to the inclusion in the report of the matters based on his information in the form and context in which it appears.