intercepts identified in the Eastern Breccia and Northern Breccia

Greatland Gold plc (AIM:GGP) (“Greatland” or “Company”) is pleased to provide an exploration and development update for Havieron, its flagship gold-copper project located in the Paterson region of Western Australia.

The Company notes that its 70% Havieron joint venture partner, Newcrest Mining Ltd (“Newcrest”) today released its Quarterly Exploration Report and Quarterly Report for the three months ended 31 December 2022 which included results released in Greatland’s announcement of 8 December 2022 as well as new exploration results which are set out in this announcement.

§ Summary results as follows (noting that the intercepts reported below are downhole width and not true width):

§ In 2023, the drilling campaign is intended to focus on growth targets and ongoing resource infill for the lower South East Crescent Zone

§ Testing of geophysical targets within the broader mining lease continues

“Results from the growth drilling programme towards the end of 2022 continued to identify higher grade extensions to the mineralisation in the Northern Breccia and Eastern Breccia.”

” The success of the drilling programme supports the expectation for Havieron to deliver an expanded mineral resource estimate. “

Havieron, a gold-copper project located in the Paterson region of Western Australia, is a 30:70 joint venture between Greatland and Newcrest respectively (“Joint Venture”).  Havieron was discovered by Greatland in 2018 with Newcrest having earned into the project.

Havieron is located approximately 45km east of Newcrest’s Telfer mine.  Subject to a positive Feasibility Study and decision to mine, it is contemplated that the Joint Venture will leverage the existing Telfer infrastructure and processing plant.

A regional map showing the Havieron licence area with regional targets and adjacent landholdings is available at www.greatlandgold.com/paterson

A further 5,580 metres of drilling from 7 new holes has been completed since Greatland’s last RNS Announcement on 8 December 2022 titled “Havieron Exploration and Development Update”.

Assay results are now reported from 1 new hole completed during this period and from 9 holes completed during the previous period (see Figures 1 and 2 below).  Of these, 4 holes returned significant assay intercepts in excess of 50 gram metres of gold (Au ppm x length metres). A total of 7 holes have been completed with assay results pending.  All reported results are set out in Appendix 2 of this RNS Announcement. 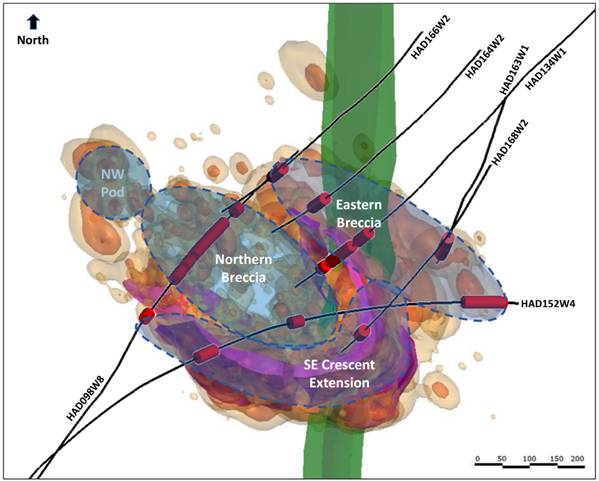 Growth drilling has been focused on the Northern Breccia and Eastern Breccia and on testing the mineral systems depth potential, while camp-scale exploration holes are underway to test targets outside the main Havieron mineralised system (Figure 2).

Figure 2. Plan view schematic of a horizontal slice at 3850mRL through Havieron Mineral System, showing the extents of the 0.5, 1.0 g/t & 2.0g/t Au LeapfrogTM grade shells with highlighted newly reported intercepts for this period. This diagram highlights new >50gram metres intersections. Refer to the inset diagram for relationship to all Havieron drilling. 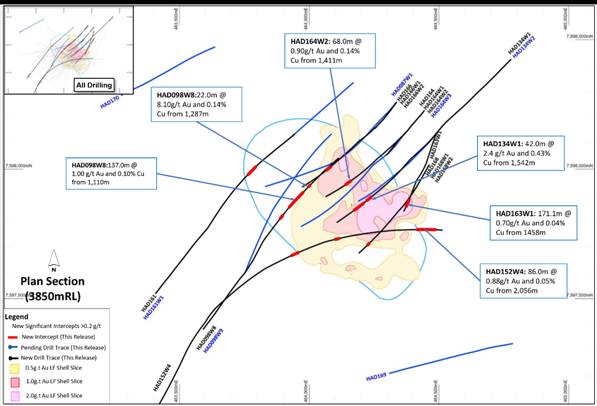 The Joint Venture continues with a growth drilling programme which has the potential to expand the Havieron Mineral Resource (see Newcrest ASX Announcement, 19 August 2022, Annual Mineral Resources and Ore Reserves Statement as at 30 June 2022).

Assays have been received for 6 holes targeting strike and depth extensions of the Eastern Breccia. A further 2 holes are drilled with results pending. The Eastern Breccia is developed below the 4,100RL (all relative depth (“RL”) information is reported in Australian Height Datum (“AHD”) +5,000 metres) with a footprint of over 500m in strike, up to 200m in width, and over 250m in vertical extent.

The zone of high-grade mineralisation returned in HAD134W1 ( 42.0m @ 2.4 g/t Au & 0.43% Cu) represents one of the recently defined northwest trending internal higher-grade sulphide dominated domains with strong similarities to the high grade South East Crescent, in the Eastern Breccia (see Figure 5).  This mineralisation, along with much of the Eastern Breccia system, remain open at depth.

Assays have been received for 2 holes that were aimed at defining the high-grade domains within the boarder Northern Breccia (see Figure 3 and Figure 4).  A further 3 holes are drilled with assays pending.

Figure 3. Schematic plan view map showing announced section locations, drill hole locations and significant intercepts reported in this release superimposed on the interpreted geology horizontal slice at level 3850mRL. (Previously reported holes are not shown for the sake of clarity. Note some holes and results appear on multiple sections due to the sections’ orientation and sections’ overlap.) 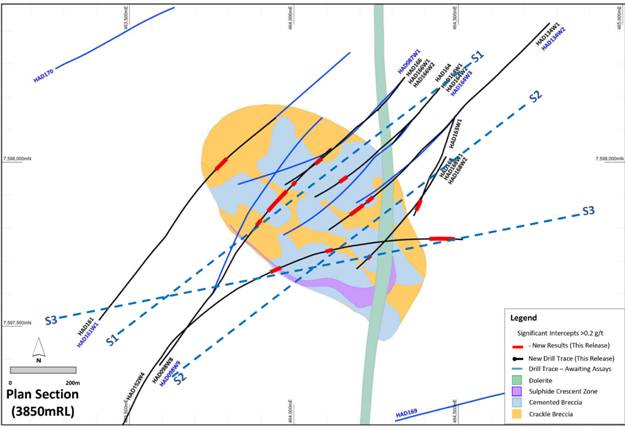 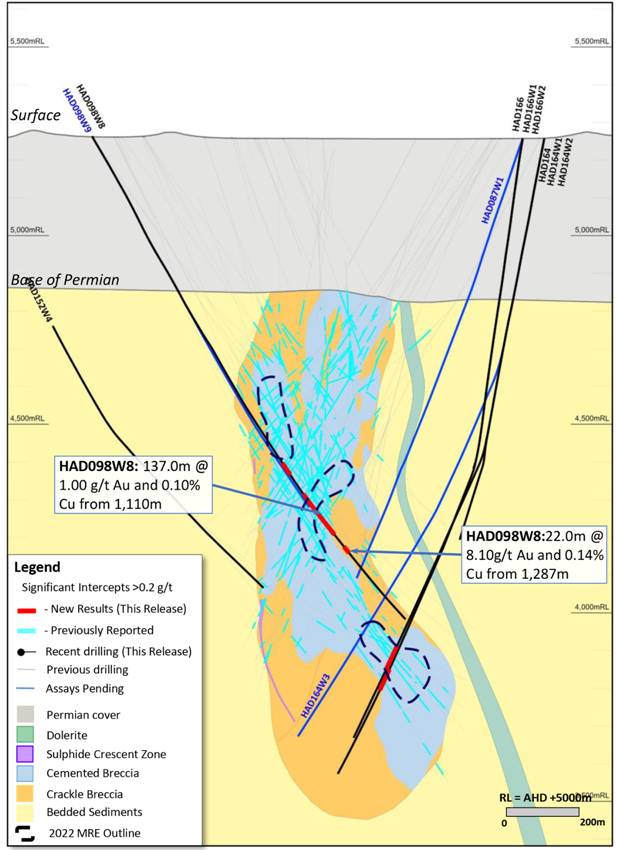 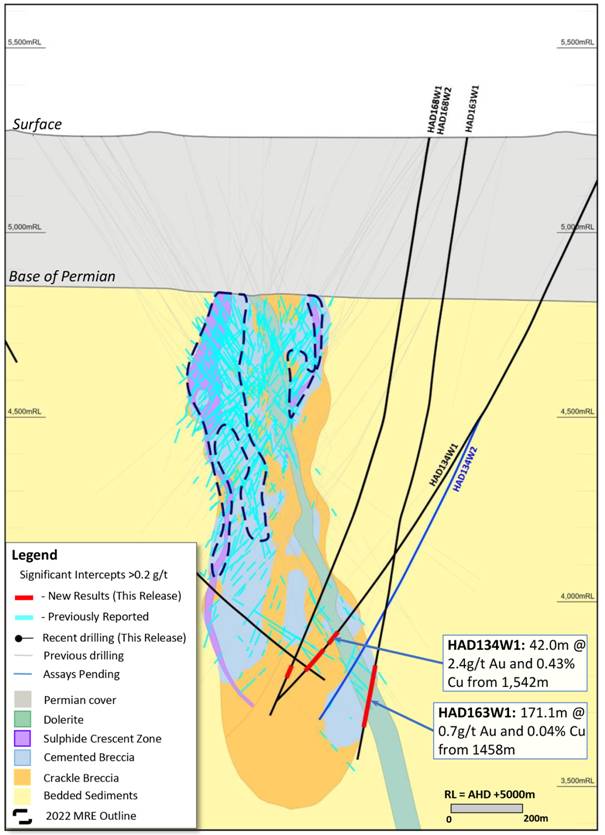 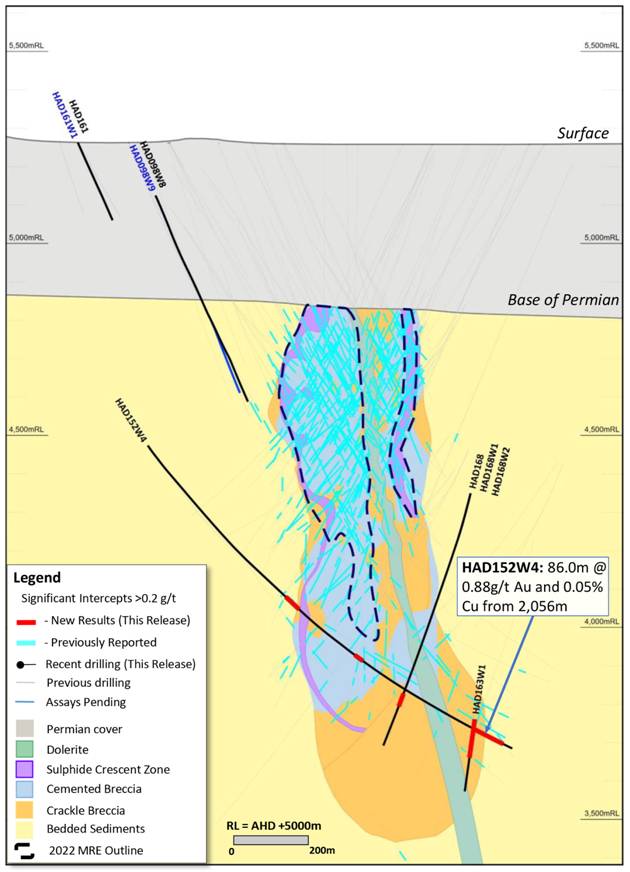 Development of the decline saw ground conditions improve with 1,519 metres now complete (as at 18 January 2023).

A dvance rates for the decline continue to increase with the project’s highest daily average advancement rates being set since the last update in December 2022 after the transition to drilling and blasting of the development face . Further progress continued to be constrained by geotechnical and hydrogeological conditions .

Works are ongoing to progress the approvals and permits required for construction and production at Havieron.