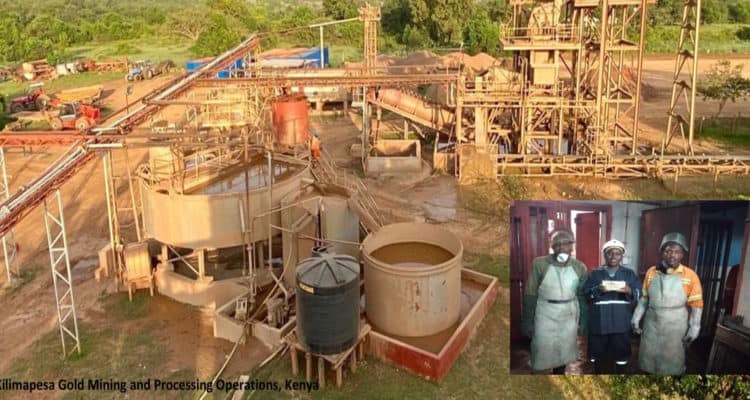 Caracal Gold plc, the expanding East African gold producer with over 1,300,000oz JORC-compliant gold resources, is pleased to announce an update on its operations and exploration activities in Kenya and Tanzania for the quarter ended 30 June 2022 (the ‘Quarter’ or ‘Q2’).

Specifically, the Company’s Kilimapesa Gold Mine and Processing Operation in Kenya (‘Kilimapesa’ or the ‘Project’) and its high-grade, shallow gold exploration projects in Tanzania.

· Exploration on the Kilimapesa Hill Deposit (‘KHD’), which began in December 2021, culminated in an updated Mineral Resource Estimate (‘MRE’) being completed during the Quarter (see RNS 12 July 2022).

· A revised Share Purchase Agreement (‘SPA’) was signed to acquire 100% of Tyacks Gold Limited (‘Tyacks’), the holder of the licences collectively referred to as the Nyakafuru Project (‘Nyakafuru’ or the ‘Project’) in Tanzania, paving the way for completion of the acquisition.

· The pilot heap leach project at Kilimapesa progressed well with the first gold production from the project, completion of pad two construction and good progress on the commissioning of the third leach pad.

· The Kilimapesa expansion project continued to be progressed some significant milestones included the orders for various long lead items being placed, geotech drilling for the main heap leach pad was completed, the talings circuit was taken offline for optimization work to be carried out.

· Underground operations focussed on development and establishing mining blocks to provide the required output and flexibility going forward for the expansion project and open pit mining was stopped for a period during the quarter to alleviate pressure on the excessive stockpiles at the processing plant.

· Reverse Circulation (‘RC’) drilling on the Kilimapesa Hill and the Maghor target was completed, and the rig was moved to the larger Vim-Rutha target which is a wide target in the south of the licence and stretches across the full strike of the exploration licence.

· Diamond Drilling (‘DD’) on Kilimapesa Hill was completed and the rig was moved to and started drilling on the Vim Rutha target.

“The team and I are pleased with the all-round performance during the quarter, significant progress has been made across the board and we are on track for an exciting third quarter.

“The results of the updated Mineral Resource have shown a significant increase in the quality of the resource at Kilimapesa Hill. We are very excited to find and prioritise the next sources of production to complement the growth on Kilimapesa Hill and the existing mining licence. The positive results in the earlier MRE update have further strengthened the Project team’s confidence and justifies our decision to expand production at Kilimapesa to 24,000oz per annum. The ounces contained in the Measured and Indicated category are now able to be converted into reserves for the mining and processing plant.

“We are looking forward to seeing the results come in from our regional exploration programme, especially the Vim Rutha target which is currently being drilled.

“The Kilimapesa expansion project continues to progress and we are on target for completion by the end of 2022.

“Signing the revised Share Purchase Agreement with Tyacks Gold in Tanzania has allowed our team to begin site work at the Nyakafuru Project in preparation for the confirmatory resource study, including drilling, to begin in October 2022. We are excited about the new gold mine development opportunity this will present as Nyakafura more than doubles our total resource base and exploration potential for the Company.”

· Construction and commissioning of the second pad was completed and the third pad construction was 80% complete during the Quarter.

· The RC drilling programme on Kilimapesa Hill was completed and the rig moved to the Maghor prospect as part of the 1st phase of the regional exploration programme.

· The DD drilling program on the Kilimapesa Hill was completed and the rig moved to the Vim Rutha prospect as part of the 1st phase of the regional exploration programme.

· Exploration drilling (both DD and RC), trenching, rock grabs sampling and mapping on the regional targeted areas is set to continue in the broader exploration licences during the following quarter.

The updated MRE was completed during the Quarter with the results reported on 12 July 2022. Highlights of the updated MRE are as follows:

· Result supports at least a 10-year Life of Mine for the current Project expansion, targeting 24,000oz per annum production.

· The significant increase in the Measured and Indicated Resource provides the required optionality for the current mining operations and the required difference in grade to feed the Milling Plant and the Heap Leach plants.

· The Environmental Impact Assessment (“EIA”) on the heap leach pant was submitted to NEMA Narok County during the quarter with licence granted on 28 June 2022.

· The EIA for the exploration drilling and open pit mining progressed well during the Quarter.

· No accidents or incidents were reported during the quarter.

· The revised SPA between Caracal Gold plc and Tyacks Gold whereby Caracal will acquire Tyacks and the Nyakafura project was signed and announced at the end of May 2022.

· The Caracal technical team (including mining, exploration and drilling) conducted a site visit to the project.

· Key processes towards completion of the transaction are being finalised with the assistance of Dentons Law in Tanzania including the Financial Conduct Commission, the Tanzanian Revenue Authority and the Minerals Commission submissions now in process.

· Site preparation for the commencement of the exploration programme will be concluded by the end of September and drilling is planned to start early in October 2022.

Outlook For the Next Quarter

Output from the underground mine and the open pit are planned to steadily increase of the next six months with mining and processing capacity planned to reach the targeted rate of 24,000oz pa by year-end.

Exploration focus has moved to the Vim Rutha regional target on which both drilling and trenching is planned. The Company will provide the market with updates on this target.

In Tanzania the focus will be on preparation work for drilling to commence in Q4 2022.

For further information visit www.caracalgold.com or contact the following: